How “close” can google get to you? 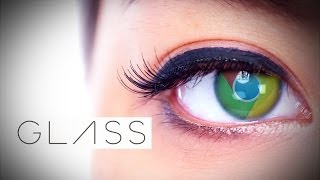 Ever since the google glasses came out, I had this idea/imagination of this program that someone is going to write for the google glasses that captures faces and recognizes them. Then it will pull up all the information about the person that you are looking at in matter of seconds (maybe not even that). At the meantime, I thought to myself that these glasses are so obvious it is hard not to notice that someone is staring at you while that little transparent screen on the glass is showing your information.

Today, I read about google patenting google lenses! It apparently started as “world’s smallest wireless glucose sensor ever made in a pair of smart contact lens” in January. Shortly after, they filed a patent for a series of micro-cameras to be integrated into their future smart contact lens.

As readwrite mentions in this article about Google lens, there are a lot of benefits that would come with this device such as the things that it could do for people with poor vision, or maybe people with diabetes. But we are not here to discuss those stuffs! There are always a lot of good benefits with the new things that come out in the world. For example, internet has A LOT of good impacts on nearly everyone’s lives today. But at the same time, it is used for almost any malicious idea in the world!

My question is now this: What if this device does make it to the market and becomes a very successful device? Now we have a camera attaches to everyone’s eyes that could potentially be compromised and . . .

I think this video sums up a lot of my points! Totally worth watching and it is only 2 minutes AND it is hilarious! Google Glass Contact Lens?!?

This entry was posted in Uncategorized. Bookmark the permalink.

6 Responses to How “close” can google get to you?